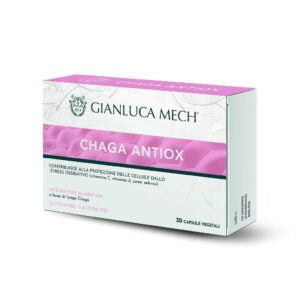 Antioxidants + Sun protection are essential in your daily routine and in any treatment and cosmetic to treat the signs of aging such as sagging, wrinkles and blemishes, as they protect our cells from the attack of free radicals. .

Today I want to share with you the benefits of a powerful antioxidant such as Chaga also known as charcoal nose and which is the main ingredient in the dietary supplement. CHAGA ANTIOX, where it is accompanied in smaller quantities by vitamin C, copper and selenium. A TOP cocktail, to take care of YOU and your SKIN.

Chaga is a parasitic fungus on white birch and other trees. Its preferred habitat is birch forests in Russia, Korea, eastern or northern Europe, areas of the northern United States, in the mountains of North Carolina, and Canada.

There are documents proving the medicinal use of Chaga for over 2200 years in China. While in Europe consumption began much later, around 1600. But it was not until the 1990s when its use became popular.

SOME BENEFITS OF CHAGA:

Vitamin C, is essential for the synthesis of collagen, thus helping the skin to look firmer and brighter as it is involved in blocking the enzyme that causes pigmentation and we must not forget which, thanks to its antioxidant power, protects your skin from the attack of free radicals, which are part of premature aging.

Copper, promotes the maintenance of the nervous and immune systems and also has an antioxidant effect 40 times higher than other active ingredients such as vitamin C. and is essential for the synthesis of collagen, improving the appearance of the skin aging and increased its thickness, in addition to its ability to keep the skin hydrated, which is a preventive action on premature aging.

It is antibacterial, so it helps fight infections and bacteria that can attack the skin, such as acne, rosacea and psoriasis.